Tough Men do not Cry, Real Men Do: Revelation made by Tennis Players Roger Federer and Rafael Nadal

Seeing a Man cry is something that we all have not normalized yet. We somehow associate crying with being Weak and seeing Men as weak is what we don’t want to accept. For decades, crying has been associated with women and is considered a weak expression. Societal norms have dictated that men are supposed to be unwavering and dominant.

If a man cries, he is not a Tough man.

The revelation is: Tough men do not Cry, Real Men do!

And this was unapologetically showcased by legendary Tennis player Roger Federer in his last professional match.

What made me write this Blog in the first place?

No, I Am not a Tennis freak.

But that did not stop me from shedding off tears on witnessing the heart-melting farewell speech of Tennis player Rogers Federer.

Sometimes back, social media was flooded with the emotional outburst of the legendary Tennis player Roger Federer, in his last professional match that made not only Tennis fans, but millions of others break into tears.

And while I was scrolling my screen, this update could not stop me from reading more about the whole experience. I was taken aback by Roger’s emotional outburst.

It was the last chance for Roger’s fans to see him play and that would mean they wanted to see him win.

The audience and the performer were in the same frame:

To see the winning one last time!

But then things went South which overwhelmed not only the player but his fellow opponent and fans too.

It not only moved me but triggered me to write how Historic this retiring moment of Roger turned out to be.

Nadal and Federer share a rivalry dating back to 2004, and while they were the fiercest of rivals on the tennis court, they remained the best of friends off it.

Retiring from the passion that the legendary sportsman Roger Federer followed his entire life was like a moment of mixed emotions. 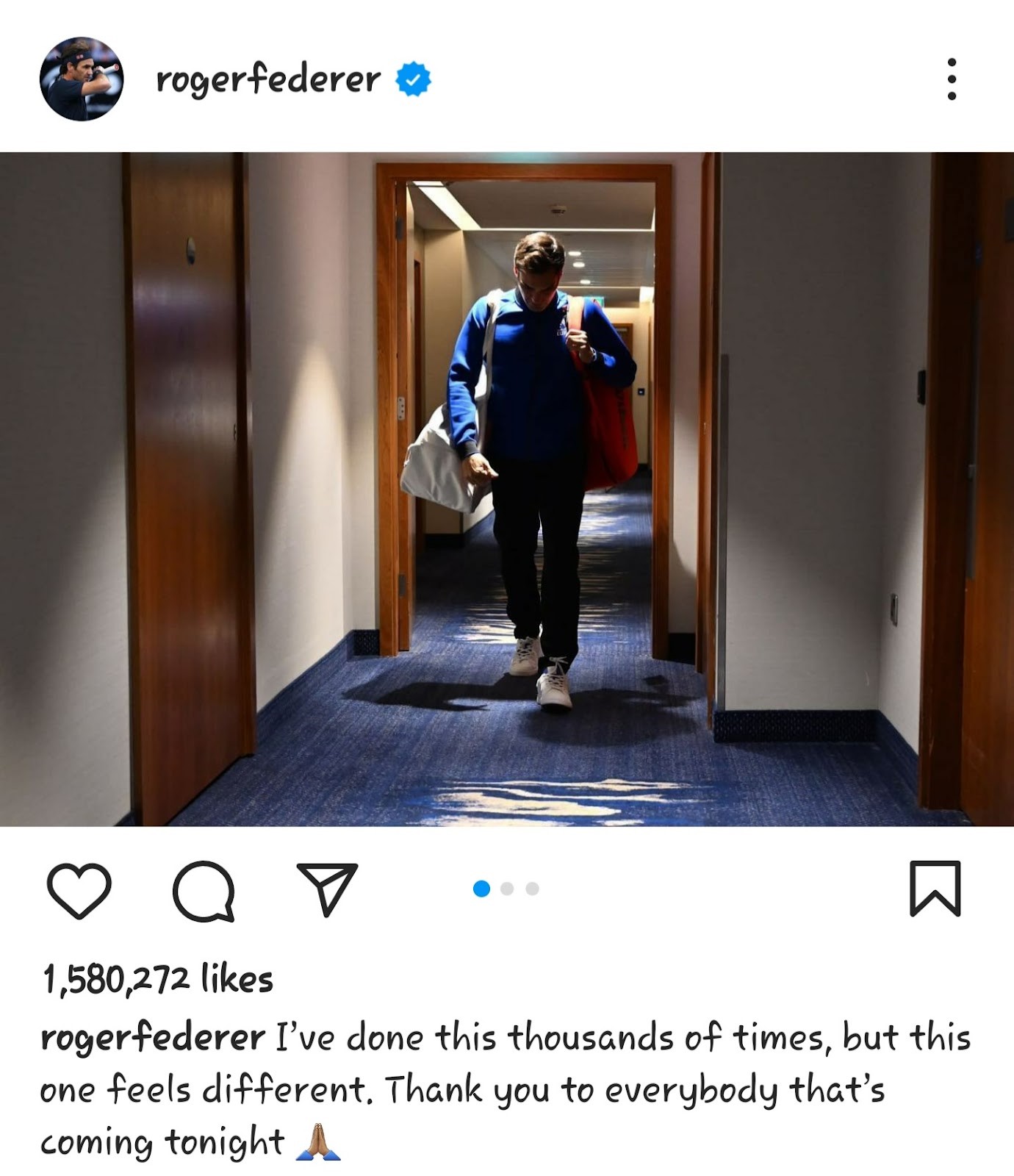 The Ball Boy from Basel who became truly a world-class legend in his play not just by his skillful craft but with his humility and integrity.

His solo success was something to be marveled at.

Someone who was to retire from Tennis and fans knew this game would never be the same again.

He enjoyed tying shoes for the last time with a spirit definitely to win and to leave his Fans flabbergasted.

Coming to the court for one last time, the feeling of taking every step on the field was already an emotional one and winning it for the last time was undoubtedly a dream of the subconscious mind.

Every shot in the play was packed with another level of emotion, determination, and nostalgia.

It did not turn out the way Roger Federer and his fans dreamt it to be. It wasn’t the fairy tale ending that everyone had hoped for, though his career was like a fairy tale.

Winning the last match of his lifetime career would have been something undoubtful, for the simplest reason. Belief!

But then Roger Federer lost it.

But that did not stop him from celebrating his Farewell from Tennis.

“Sportsmanship is when a guy walks off the court and you really can’t tell whether he won or lost, when he carries himself with Pride either way”~Twitter @Federer Swiss

Roger lost the game, but he won Tennis forever!

Roger’s post on Instagram about his last play was something that would leave each one of us, Inspired!

Had Roger Federer won his last game, it would have been something normal, expected, hoped, and firmly believed but he lost, and that made it Historical.

Even his mind, body, and soul would have wanted to win the last play but then that divine power wanted to make him win monumentally, making this heart-melting moment imprint in souls forever.

I’m sure if you are reading this big thing for the first time that flooded social media sometime back, you definitely will feel the ache and joy together.

Revelation: Tough Men do not Cry, Real Men Do 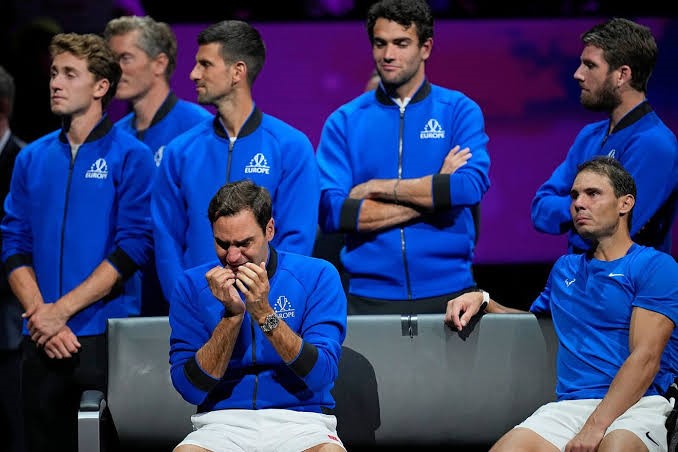 Tough Men do not Cry, Real Men do: Revelation made by Tennis Players Roger Federer and Rafael Nadal

Immediately after the loss in his last professional match, Federer was hugged by his teammates before he was called upon to speak a few words about the match, the sport, and to the fans, one last time, and the Swiss legend couldn’t hold back tears in his lengthy and emotional farewell speech.

“We’ll get through this somehow, will we, right?! Look, it’s been a wonderful day. I told the guys I’m happy, I’m not sad. It feels great to be here. I enjoyed tying my shoes one more time – and everything was the last time.

It felt lonely for a second when they told me to come out one more time, it didn’t feel great. But to say goodbye to a team, I always felt I was a team player at heart.

Federer was asked about the moment, and he explained that they were more happy tears than sad tears.

Rafael Nadal, who was listening to Federer’s farewell speech, was also teary-eyed. It’s hard to make Rafael emotional, but it’s beyond rivalry, beyond the competition.

The outpouring of emotion from the two men who have had countless battles over the years proved how monumental the moment was.

The scene of Roger Federer and Rafael Nadal crying next to one another will go down as one of the most memorable moments in tennis history.

Tennis will never be the same again!

At one moment during the post-match tribute for Federer, he briefly held Nadal’s hand as tears streamed down both of their faces. 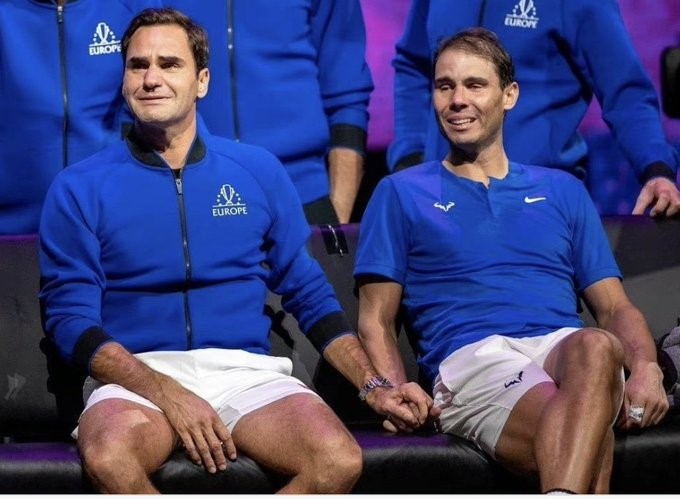 Rafael’s words for Roger in his retiring match made it a real win for him.

Rafael Nadal: “With @rogerfederer’s Retirement, A Part of Me Has Left with Him”

No one has worn their heart on their sleeve as Roger has in his farewell speech. This will be a record that would remain unbeaten. 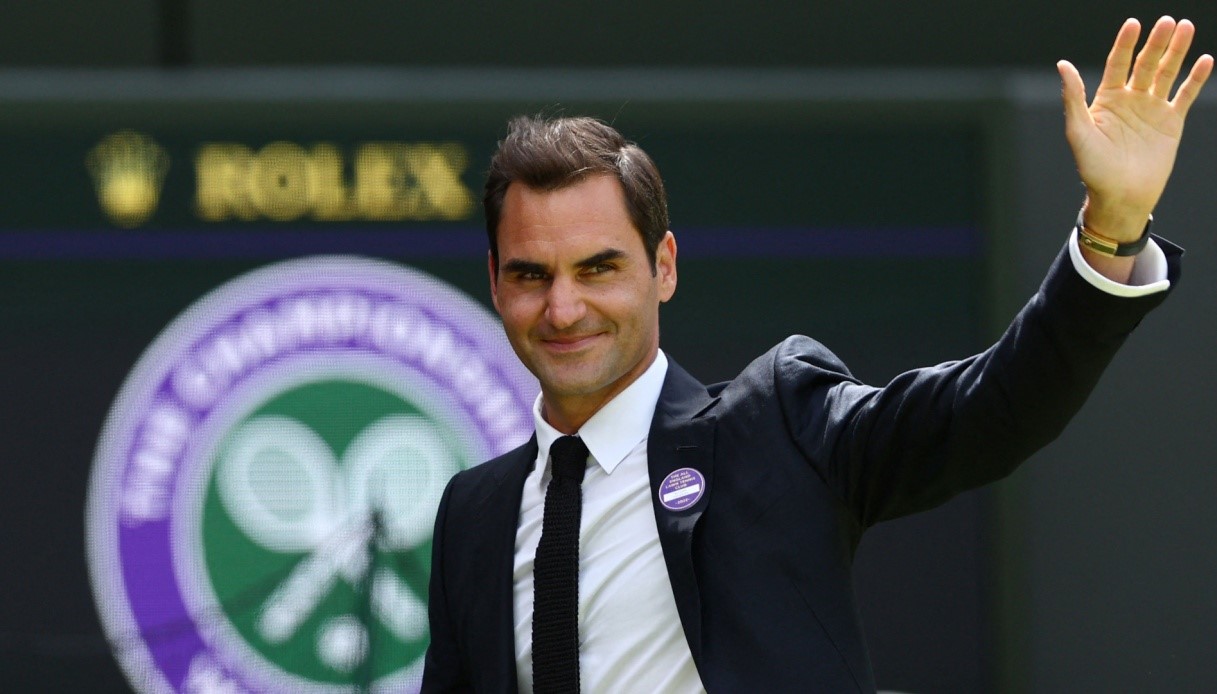 This moment normalized men crying: As both Roger Federer and Rafael Nadal were captured shedding tears while sitting beside each other, netizens took to Twitter to point out how two tennis stars crying was a big nod to the topic- Men also cry!

It’s rare to see grown men cry.  But today has shown it’s heroes like Roger that allow future men to cry in public with no shame.

Roger and Rafael displayed that love conquers over war. This was a true example of friendship and honor amongst all the players.

This is about two men who brought out the best of each other in tennis and that love always wins and humanity against rivals is a rare sight these days.

Social media was blown with emotions

When Legend’s lose, Their Attitude makes them a winner 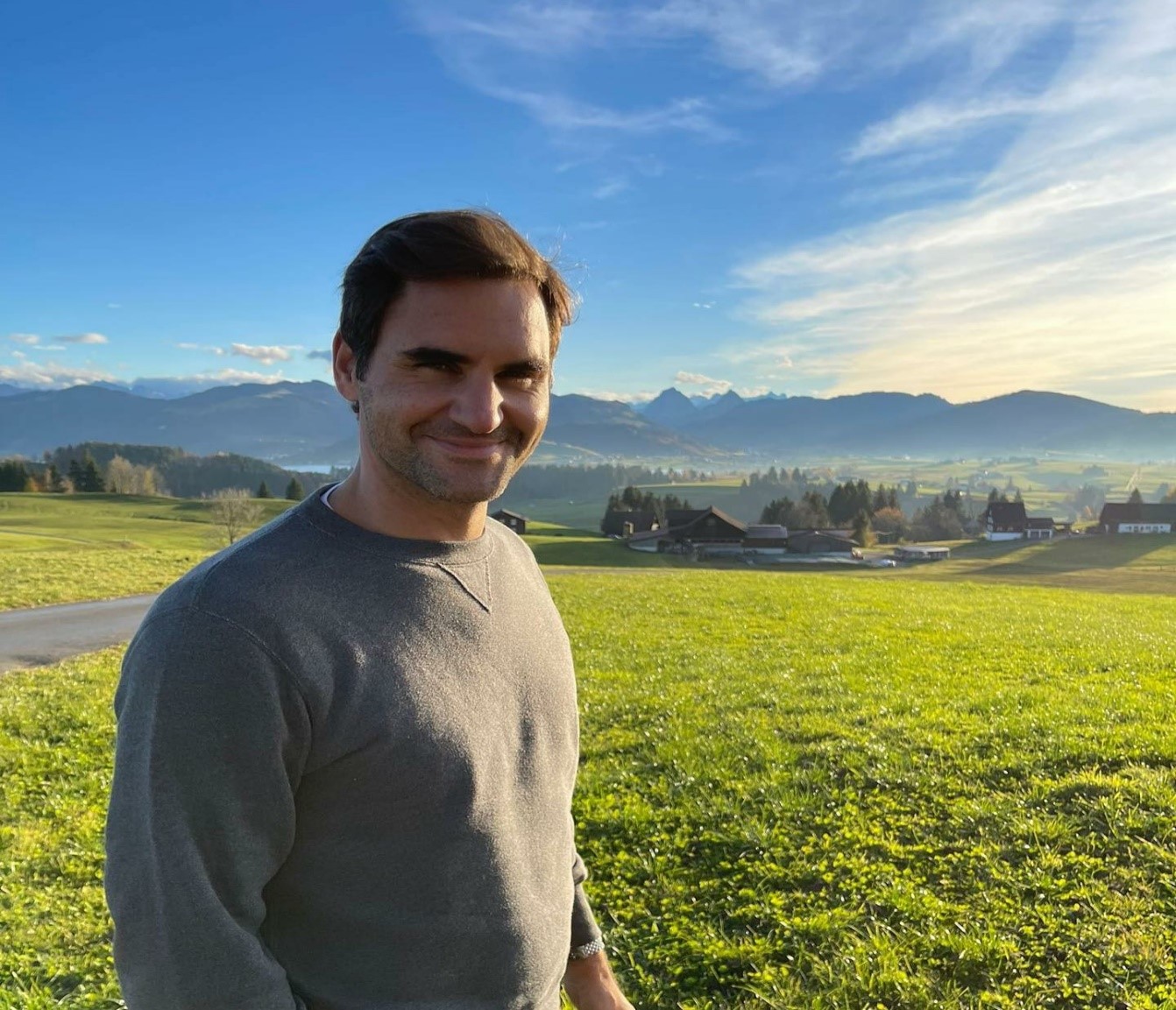 We would cheer and applaud seeing legends like Roger winning.

But seeing them lose, we witness the real Legends winning with their Attitude.

And that is what inspires the World.

Had Roger won the game, the world would have witnessed a retiring Tennis player winning, but Roger lost, and the World saw the Real Hero.

A living legend, a gentleman that Tennis will ever get.

And all this came with his loss.

Witnessing Rafael, his rival and opponent shedding tears and sobbing by his side at this moment made the World applaud Roger’s Character, Attitude, and Brotherhood.

It was not a weak gesture but a Braveheart to embrace his final moments so transparently that it left no single dry eye in the place. 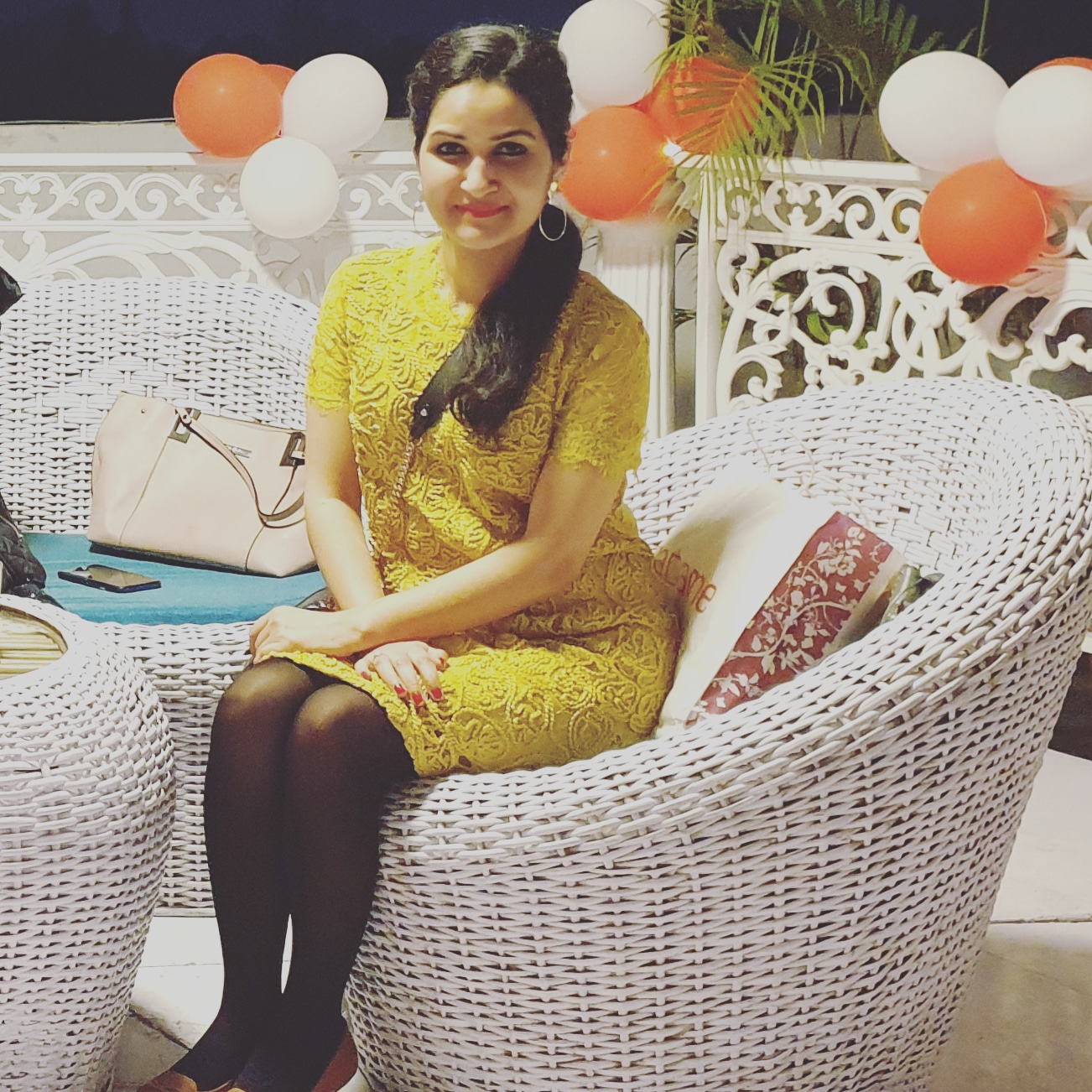 Thank you So much Aakriti💟